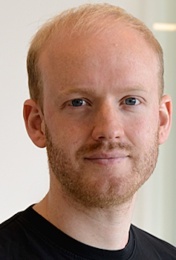 Andrew received a PhD in Cognitive Psychology from the University of Surrey in 2014 under the supervision of Paul Sowden, with his thesis on the subject of the cognitive processes involved in creative thinking .  Andrew completed his first postdoc at University College Dublin with Mark Keane on an Enterprise Ireland funded  project investigating the cognitive benefits of gamifying surveys.  Following, this Andrew completed a Science Foundation Ireland (SFI) Industry Fellowship with DAQRI on a project investigating the benefits of augmented reality (AR) technology for supporting human performance on procedural tasks within industry settings.

Andrew is particularly interested in the interface between psychology and technology, investigating both how technology can support human cognition and the development of internet based research methods for collecting data on human cognitive processes.

In Claire’s group, he will help to lead the DETECT project, funded by the Global Brain Health Institute aimed at identifying individuals at risk of developing Alzheimer’s disease using gamified cognitive tests administered at scale with web and smartphone-based data collection.

Pringle, A. (2011). Shifting between modes of thought: A mechanism underlying creative performance? ACM: Creativity and Cognition 2011, 467-468.